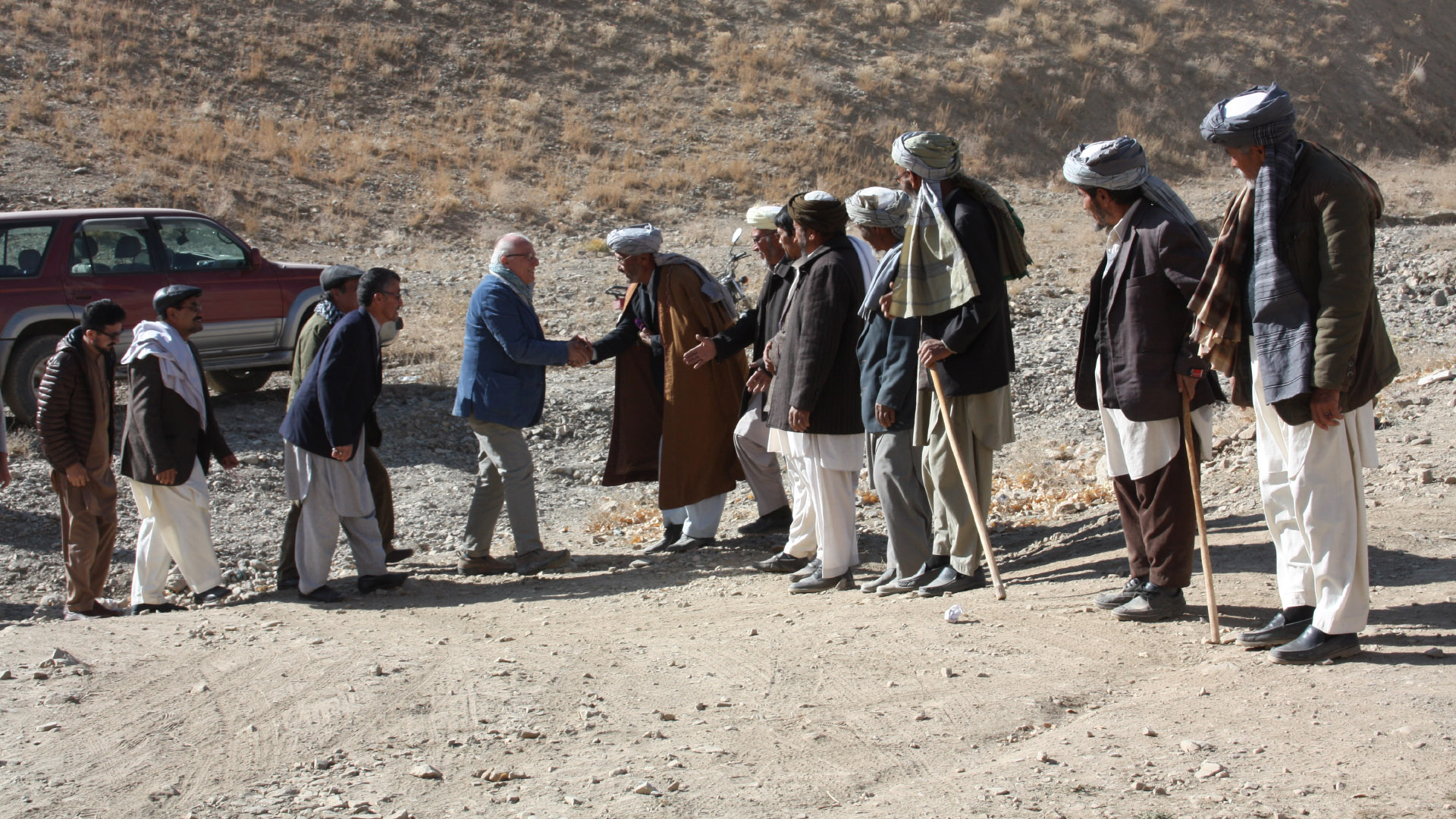 Thanks to the support of a group of loyal and determined donors and the invaluable help of Shuhada Organisation we made it again! On October 27, a mild and sunny day,  Comitato Arghosha inaugurated Meyankawak primary and secondary school, the eleventh of the series of buildings that we have funded since 2005, when we started operating in Afghanistan. 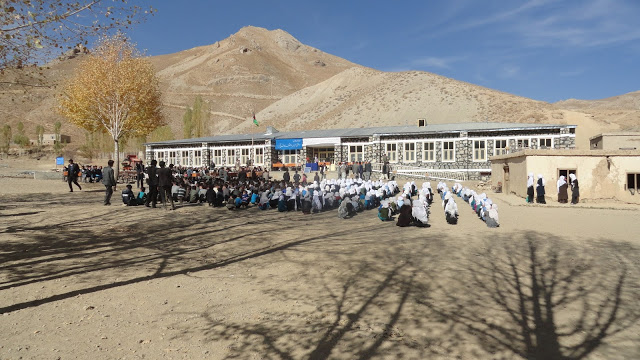 An overview of Meynkawak primary and secondary school, built with the most modern standards certified by the government. On the right you can see the old building made of pressed mud.

Meyankawak school lies at 2700m in Panjaw district of Bamiyan province and is located 230km from Bamyan town. It is the remotest building that we have funded so far. The school is mixed and hosts over 500 boys and girls. It has 12 rooms out of which 8 classrooms and 4 rooms dedicated to the administration and laboratories. It has been build according to the latest government standards and was supervised by the technical team of Bamiyan Department of Education. At the inauguration ceremonies all the authorities expressed their admiration for the quality of the building, saying that it should be taken as an example for all the school buildings (there are 49 at present) of Panjaw district. 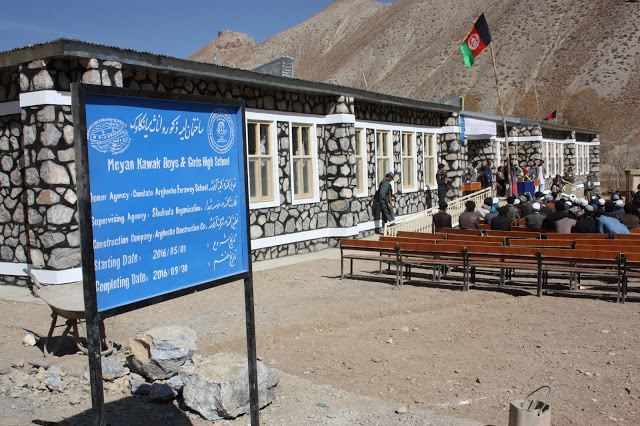 The school sign proudly marks the year of construction, the donors and the builders

The inauguration was attended by the top authorities of Bamiyan and Panjaw department of Education and by the Governor of Panjaw district, Rustum Ali Panahi. The security was tight and the head of Police of Panjaw district was present at the ceremony. The school has 14 teachers (out of which 3 females), a headmaster and a guardian. The building was completed in record time: 5 months, starting from the beginning of May, when the foundations were laid, to the end of September. 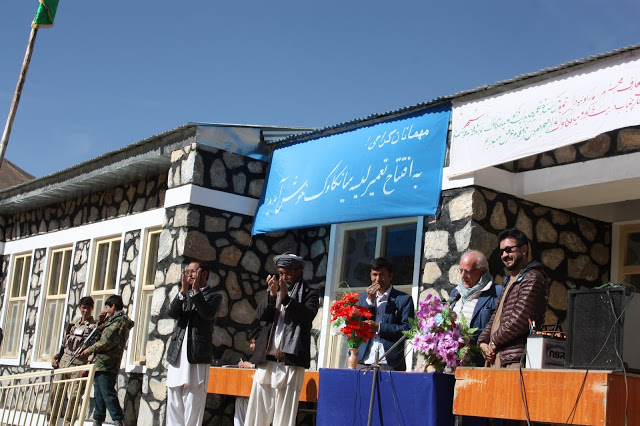 Marco and Mustafa address the public, congratulating everybody for the collective effort

The valley is pretty green and the school is surrounded by numerous poplar trees. We wish we could help in the future by planting some more trees of different species, in order to give the pupils a more pleasant environment, where they can learn as well a bit about botanics and environmental issues. 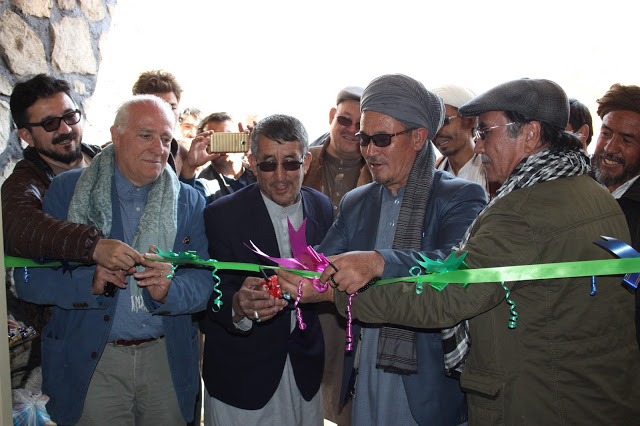 Cutting the ribbon with the authorities and village elders

The ceremony was moving and intense, as the villagers had been craving for a new school for many years. Eventually, they all were very happy to see that the new building was worth the long wait, as it was erected according to the best standard practices available now in Afghanistan. 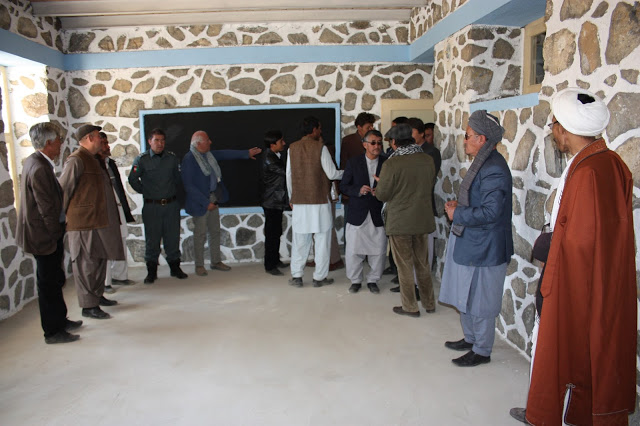 Hanging around with the local authorities in a brand new classroom

The new school building is made of local stones and was erected mainly by local workforce, under the supervision of some experienced builders coming from outside. The classrooms are modern, with smooth blackboards and the floor in hard concrete, much easier to be kept clean than the dusty ones of the old structures. 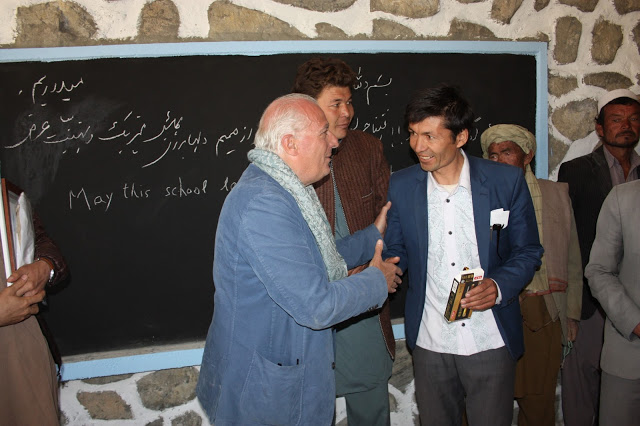 Marco discusses with the head master of Myankawak school

Both the head-teacher and Marco wrote on a blackboard a goodwill message wishing well to the pupils attending the school now and in the generations to come. 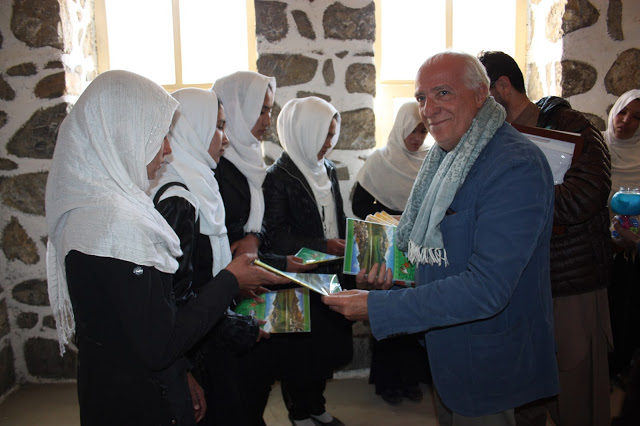 Distributing books and pencils to the girls’ class delegates

Mustafa and Marco concluded the ceremony with the distribution of books and pencils to the pupils, wishing them well with their studies and chatting with them about their aspirations. All of them were thrilled by the new building and look forward to attending lessons next year in a comfortable setting, where studying will become enjoyable. Until now, because of the small dimension of the old school, they were forced to attend classes in shifts, waking up early or going back home late, walking up to 4 hours a day back and forth. 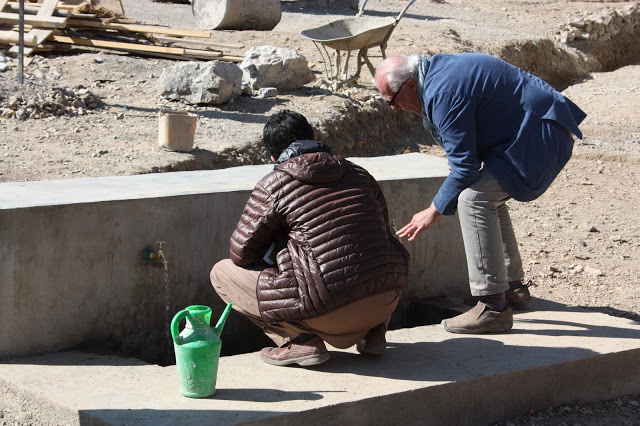 Meyankawak school was the result of an incredible effort of solidarity among the villagers. They raised funds to pay for the land where the building was erected and a generous donor made a water spring up the hill available for the exclusive benefit of the school children. His act of generosity was widely praised during the ceremony. 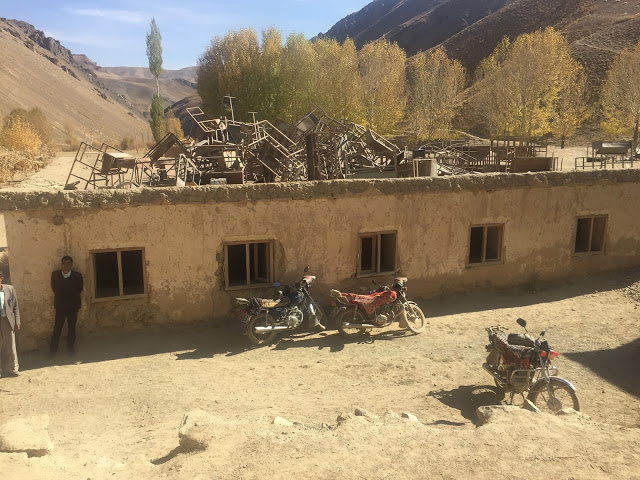 Meyankawak school brings to 4,300 the number of pupils attending the schools funded by Arghosha Committee. Out of the total, 3,000 are girls. The teaching personnel employed by the State is over 130, with around 30 female teachers. All schools work well and the buildings are being kept in good conditions by the local population. Arghosha Committee has funded so far 4 school libraries and 3 years ago started a programme of University scholarships for the talented girls, who successfully passed the University exams of admission but cannot afford paying for their studies.