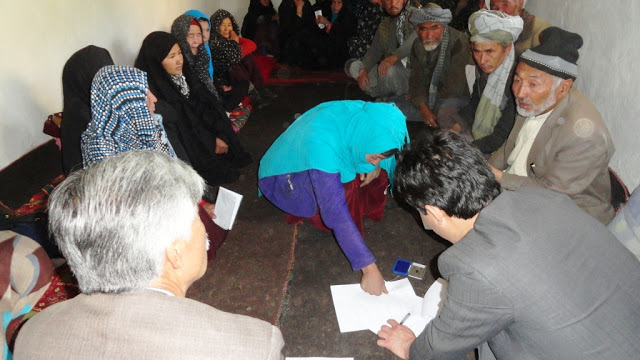 An empowerment programme for 500 women in Bamiyan Province

28Eng Gholam Hussein Matin (left) enroles women of the villages in Arghosha and Dar e Ali in Yakawlang district for the 3 years programme.This year we decided to support a women empowerment project of Shuhada Organisation that has been working with success since some few years. The way it works is simple but pretty clever. A group of women of the most disadvantaged families of a particular area receive a certain number of pregnant ewes and lambs. After 3 years, the beneficiaries will give back the animals they received but will keep for them the animals born and grown during that period, becoming owners of their herd. They will be responsible of their animal stock and learn how to manage it in terms of keeping it healthy and exploiting it economically.

Eng Gholam Hussein Matin (left) enroles women of the villages in Arghosha and Dar e Ali in Yakawlang district for the 3 years programme.

The women targeted by the project are either widowed and in charge of their family or part of very poor families. They will be responsible of the success of the programme. In exchange of the animals donation, they commit themselves to a programme of alphabetisation, of hygiene and animal health and are also taught about basic woman rights. 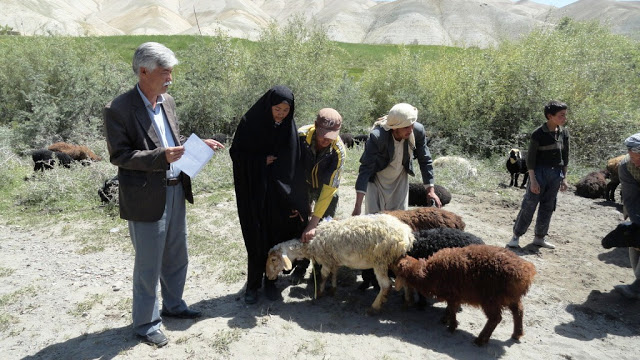 The programme in Yakawlang district (villages of Arghosha Khakdaw and Dar e Ali) will benefit 45 families for a total of 550 people (302 female and 248 males) and will bee supported by two veterinaries, two teachers and four guards. It started this summer (2016) with the distribution of 180 ewes, 180 lambs (4+4 per family) and teaching material (books and stationery). 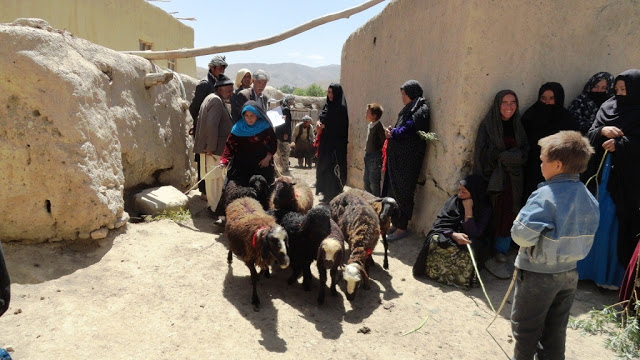 The ewes just assigned roam into the village

In exchange of the animals received, 60 females – girls and women coming from the families benefiting from the programme – will attend the school courses arranged by Shuhada. 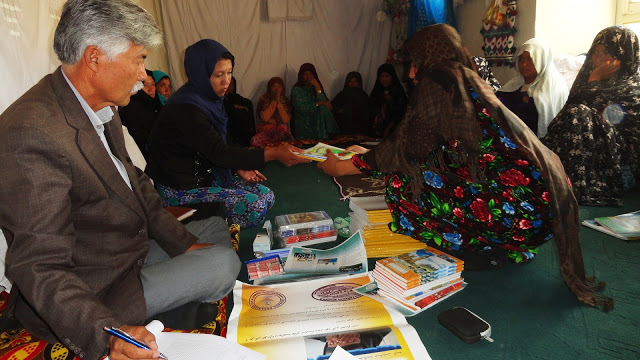 Engineer Matin distributes the books for the alphabetisation course in Yakawlang

According to our information, the alphabetisation course is progressing well in Dar e Ali area, while in Arghosha Khakdaw, which is in in a very remote area, it started at the end of the summer because of some transport and communication problems. 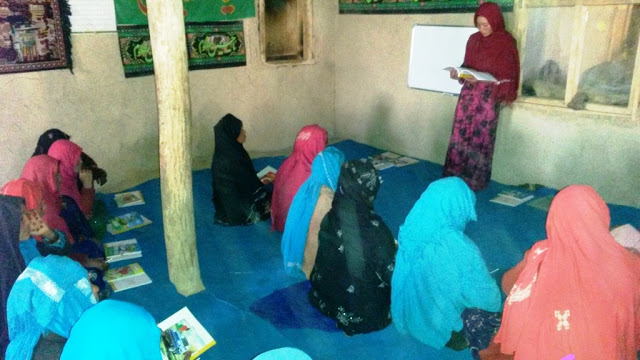 According to our information, the alphabetisation course is progressing well in Dar e Ali area, while in Arghosha Khakdaw, which is in in a very remote area, it started at the end of the summer because of some transport and communication problems. 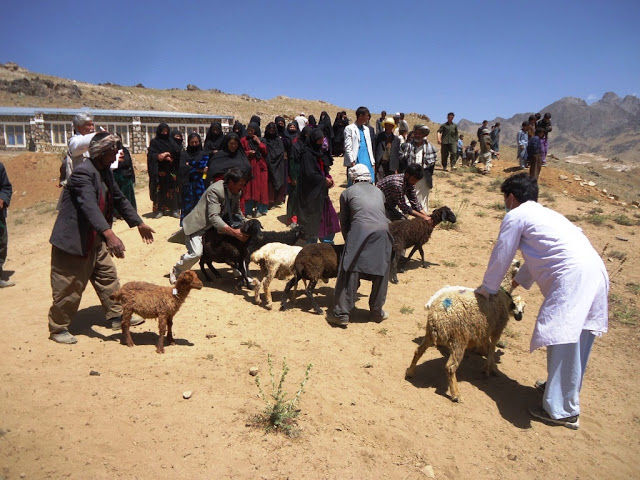 Distribution of ewes and lambs near the school of Sar e Sarab (background), Waras district

The other district involved in our women empowerment project is Waras, at the southern end of Bamiyan province. It benefits the villages surrounding Sar e Sarab school, the tenth school funded by Comitato Arghosha and inaugurated in October last year. The villages are Miyana Deh-Lado, Pashakal and Badqolak. Again, 180 ewes and 180 lambs have been distributed to 45 families for a total of 351 people (210 females and 141 males) 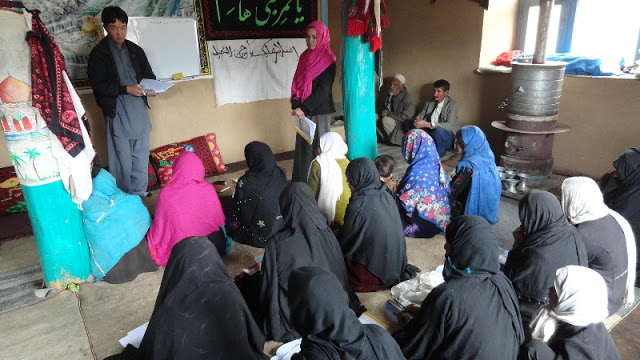 Also in Waras, the beneficiaries are 60 females (girls and women) and the courses that have been set up are three, as three are the teachers recruited, along with two guardians and the veterinary. 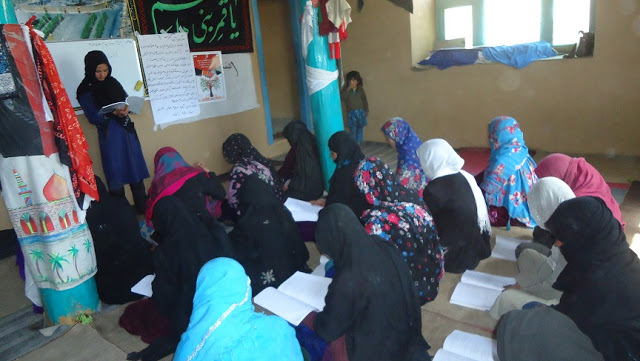 A second course is in progress in Pashakal

The aim of these projects – set up by Shuhada and funded by Comitato Arghosha – is to empower women both economically and socially. They will be more independent and responsible through the ownership of a small herd, and they will learn literacy, numeracy and basic human rights. 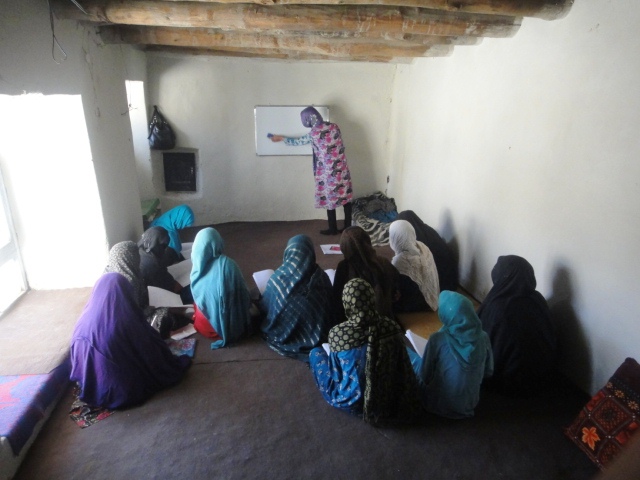 For Arghosha committee these projects will complete and deepen its commitment in a specific area where it funded three schools.  In Yakawlang district the programme targets the most disadvantaged villages around Arghosha and Dar e Ali schools (Arghosha, Khakdaw, Zardgia, Miyana Dasht and Dar e Ali villages), while in Waras it covers the area around Sar e Sarab School (Acha Mazar, Pashakal, Lado e Sarab, Badqolak, Qol e Mohammad villages).

In total, the projects are involving 90 families of 901 people, of which 512 women. They will enhance their welfare, by creating 45 owners of small herds, and most importantly, they will give access to literacy and numeracy to 120 girls and women. The result is the improvement in the living condition of 90 families in a dozen of villages gravitating around three of the schools we funded. It will take time, but we are confident that at the end of the three years of the project, the condition of many women will be improved for them and to their family’s benefit.