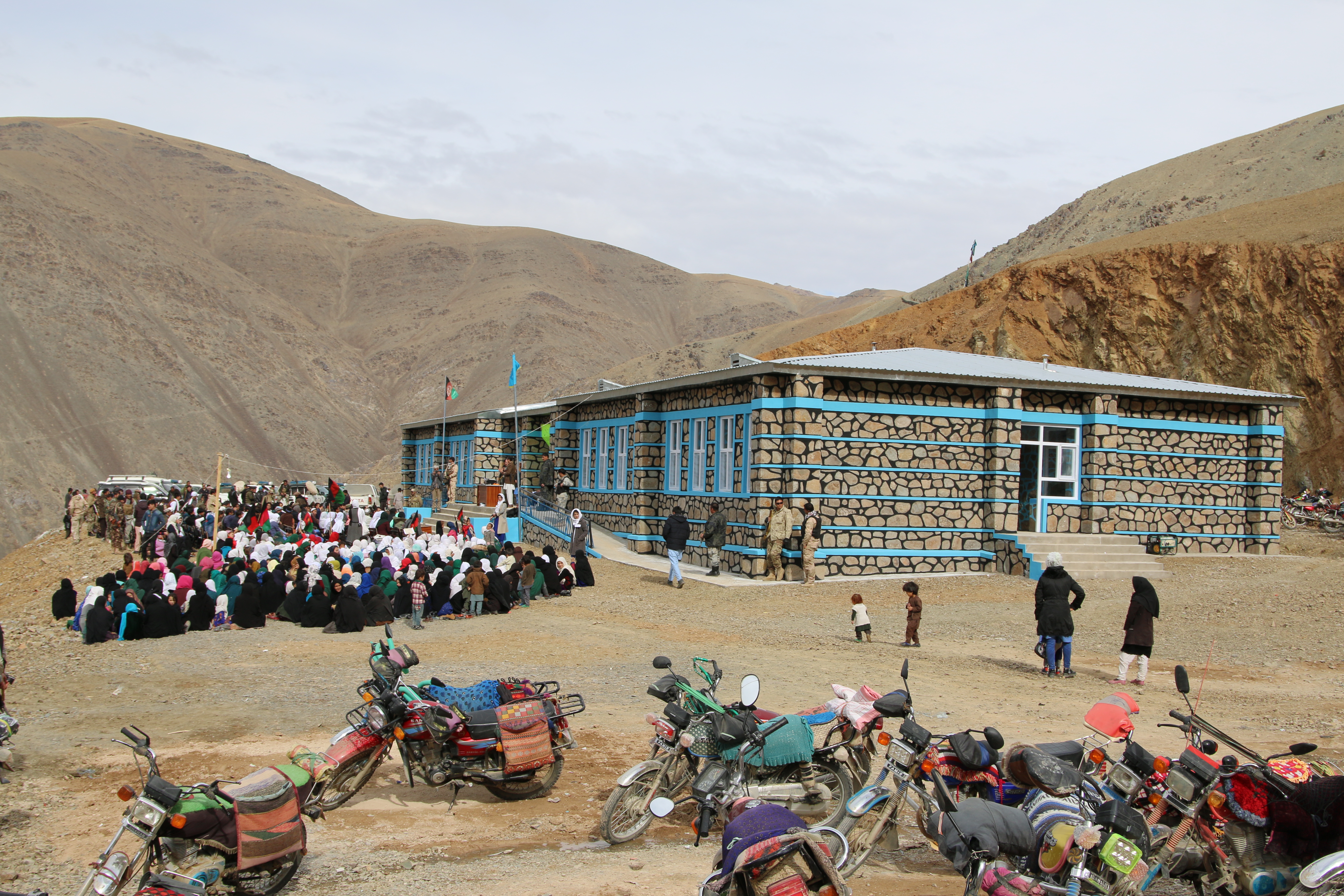 A memorable day for Largar School

Tuesday, November 19, 2019 will be remembered in Largar as a special day. On that sunny and mild day of late autumn, a modern and elegant school building was inaugurated on the very ground where over 500 pupils, mainly girls, were forced for years to study outdoors with their teachers in very disadvantaged conditions. From now on their life has changed. They will have an appropriate structure where they could study in peace, sheltered by a strong building that contains 8 classrooms and 4 administrative rooms. 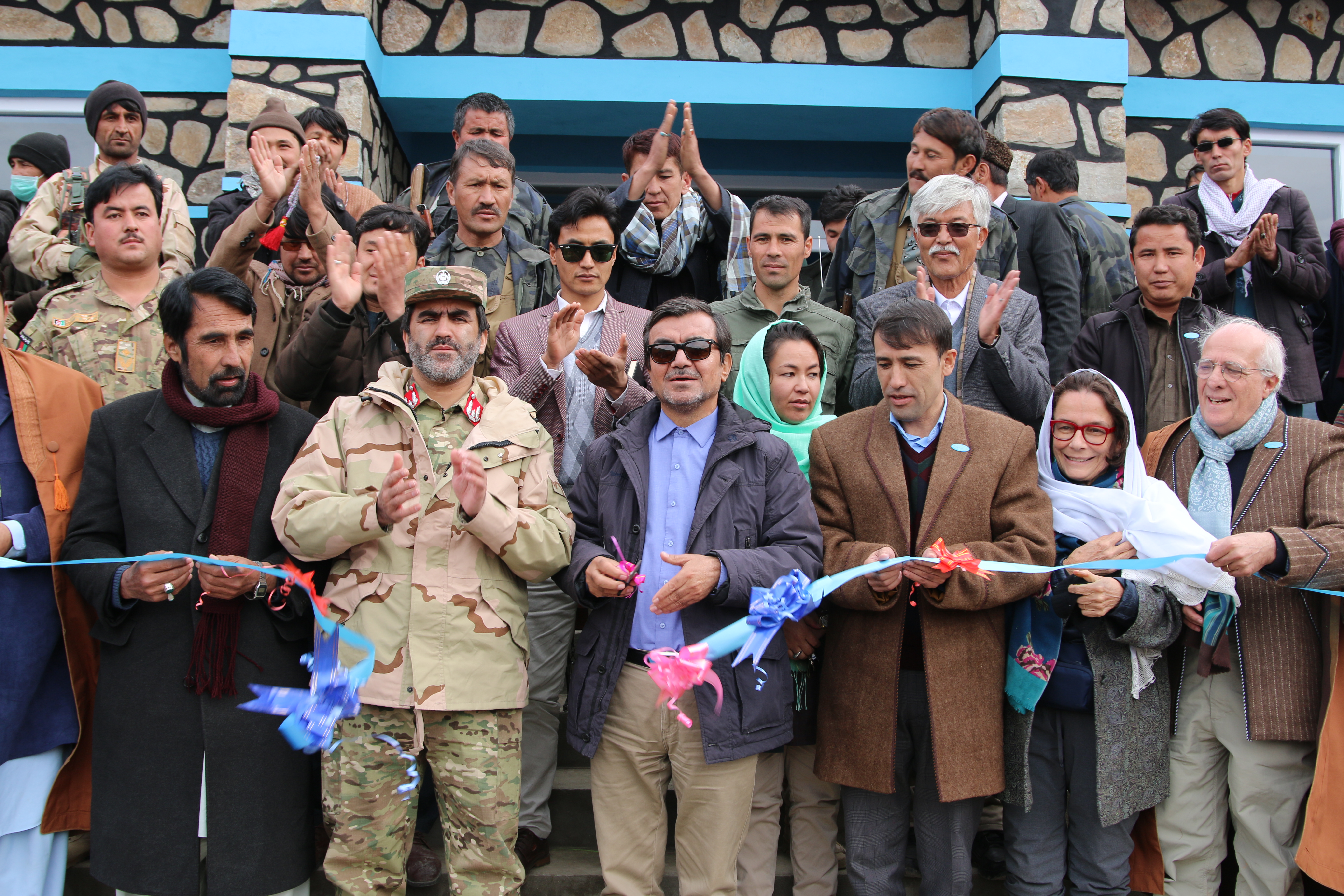 The ribbon is cut by the Governor of Daikundi province, Sayed Aala Rahmati (centre) at the presence of the Governor of Shahristan district Zamin Ali Poya (first left) and Shuhada and Arghosha representatives

Largar School will be a shining example of a new breed of public constructions in Daikundi, built with the latest specifications according to the criteria requested by the Afghan government, including a series of structures for disabled facilitating the access to the building. Its blue colour inside the classrooms is conceived to create a more serene environment for the pupils. The benches and desks, funded by the organisation Femmes de l’Europe, have been assembled by local carpenters. Also the greatest part of the labour force that built the school was local. A school is a common endeavour and gives a community a sense of purpose and direction.  The fountain that is bringing fresh water to the school was made possible thanks to the good will of a benefactor that lives in the village and donated the water spring to the benefit of the community. We are honoured and humbled by his generosity. 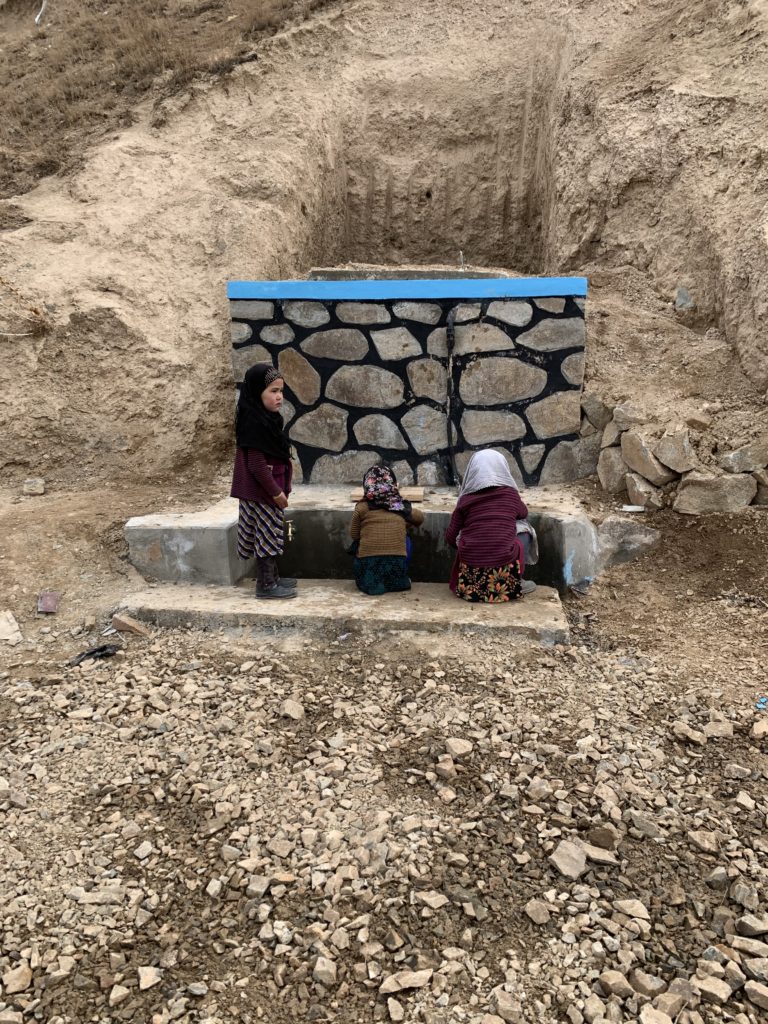 For Arghosha Committee this school is a new breakthrough as it is the first building that we fund outside Bamiyan province. We must say that we are very happy with the outcome. The building is state of the art and is a great start for a region where there is still a desperate need of schools structures. It will set an example for many others in the years to come. It is a pretty important factor as it proves that even in one of he poorest provinces of Afghanistan, constructions can keep the best standards of the rest of the country. 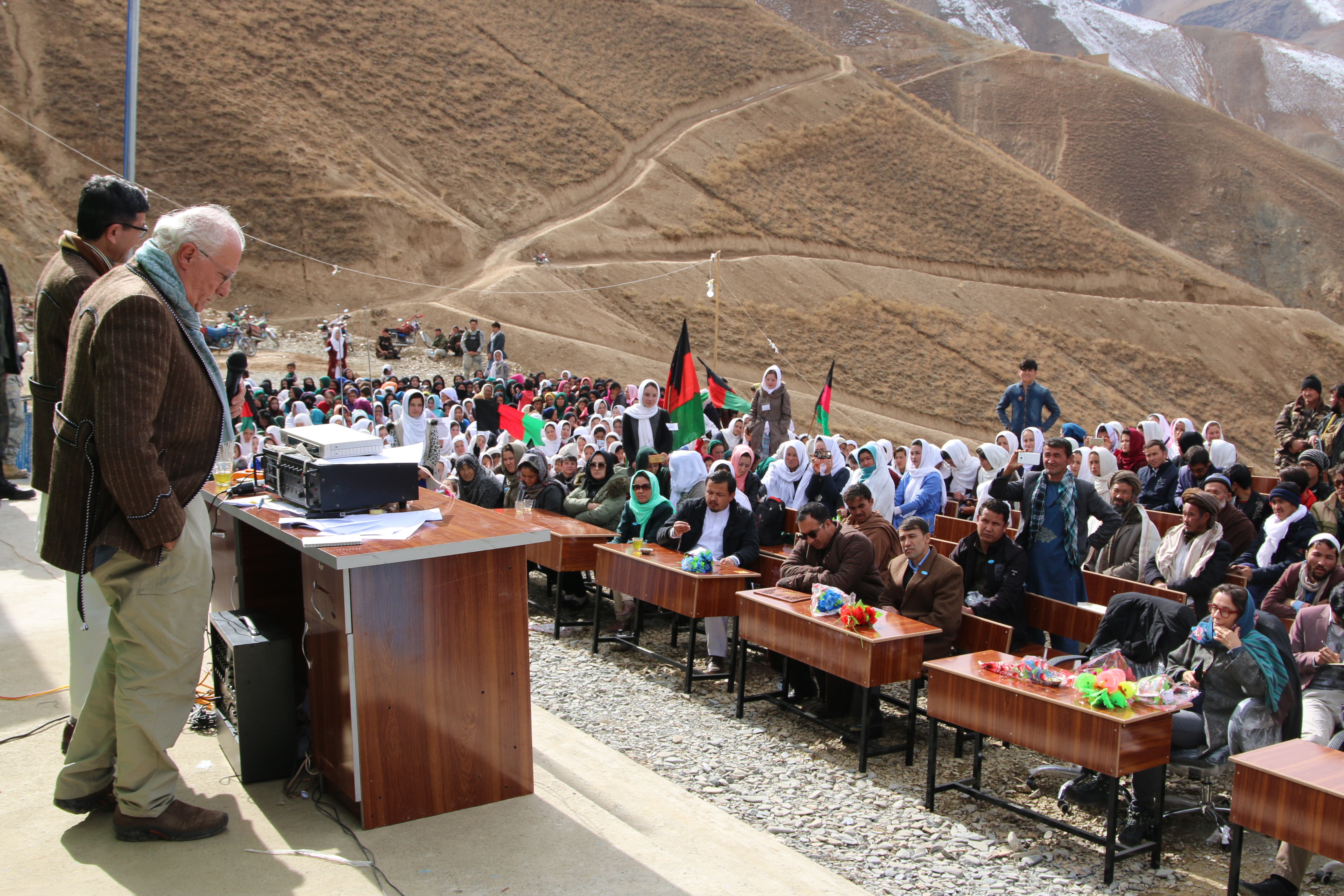 Marco and Moustafa speaking at the inauguration. The public is sitting on the brand new desks ready to be brought inside

We spent a wonderful morning together our friends, the villagers, the teachers of the school, the village elders. Everybody was thrilled by being there to share a special day which will mark a new dawn for many of the inhabitants of this valley. The future students were present in the last days before the end of the school year. They chanted hymns and recited poetry. Over 500 people attended the inauguration with celebrations that went on from mid morning until the early hours of the afternoon. 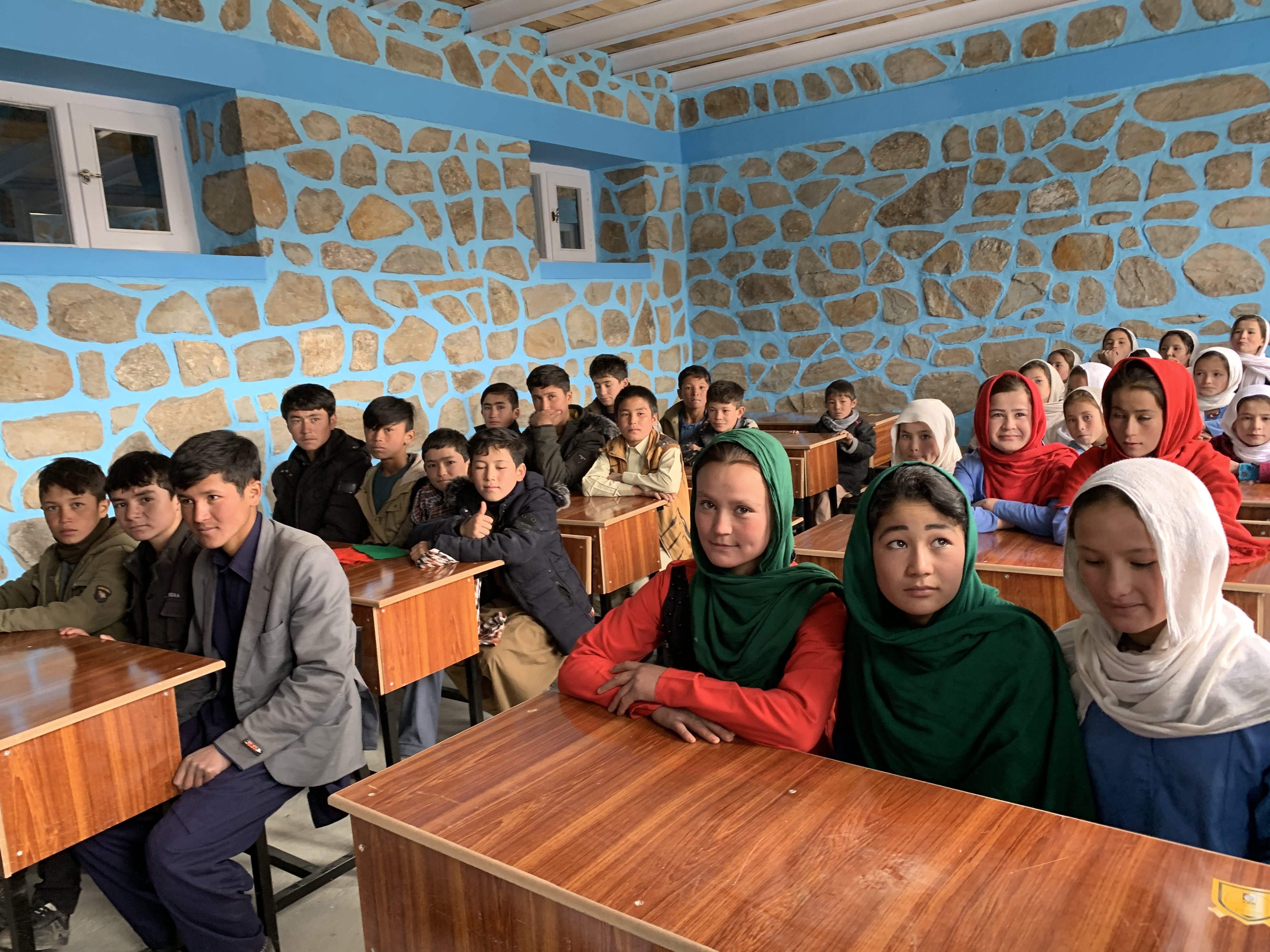 Boys and girls testing the new desks. The days when they were sitting on the hard soil at the mercy of the weather have gone forever

We are proud of supporting the populations of Daikundi. They fully deserve our help. They are craving for a better future. Daikundi is lower in terms of altitude than Bamiyan province and more fertile and is rich in fruit trees, in particular almond. The blossoming of almonds in April is one of the most amazing features of the region. The Province is also rich in honey because of the strong presence of bees living on the huge amount of flowers in the area. 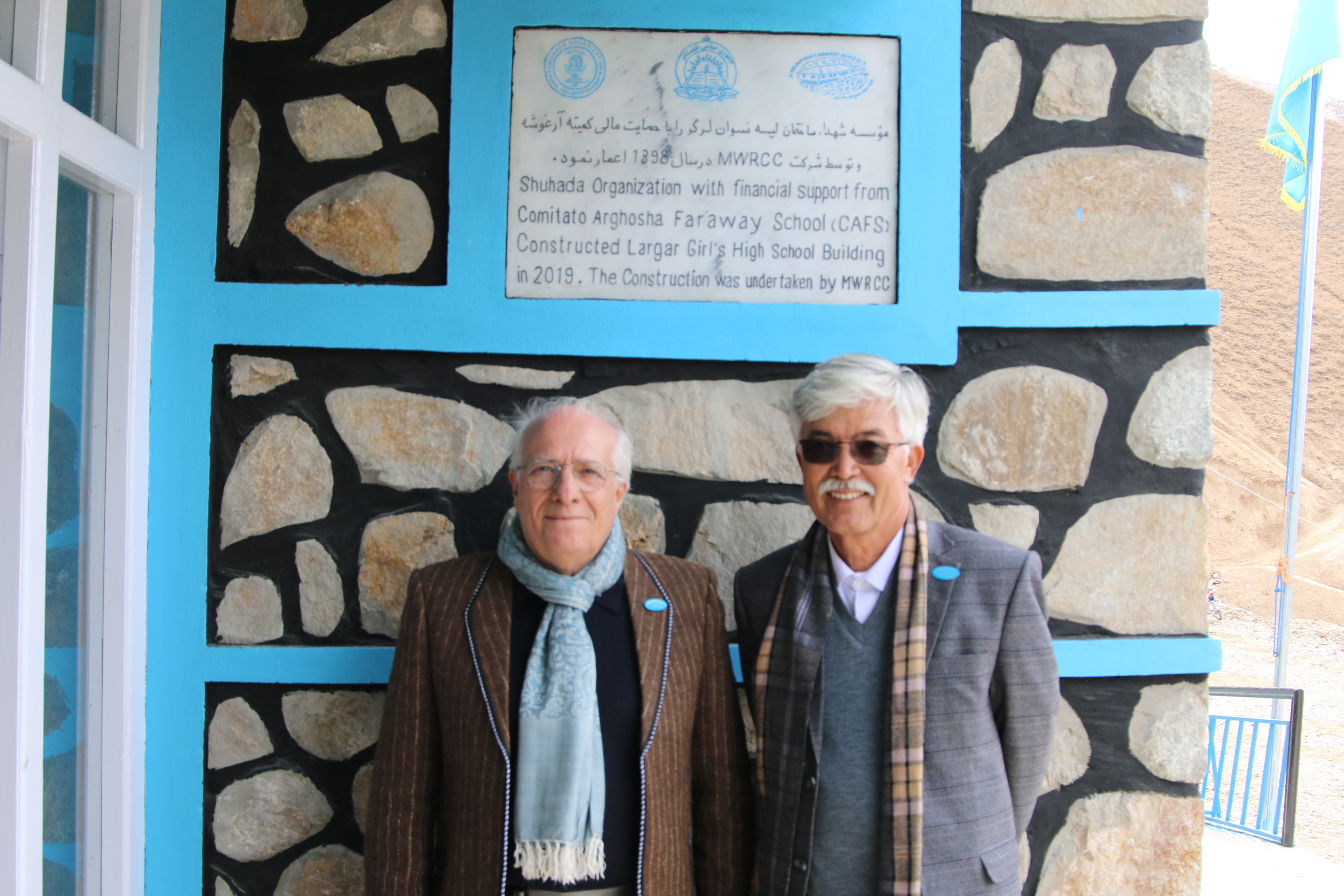 Marco and Engineer Gholam Hussein pose proudly under the tumbstone of the school. A real milestone in the history of Largar, Shahristan district and Daikundi province at large

We have decided to exploit immediately the potential of our new school and will choose a talented young girl coming out of year 12 with good marks and with a good score to the national Kankoor (admission exam at the University) to enrole her in the next school year at Gawharshad University in Kabul. The process of selection has already start with the help of Ms Goljan Samar, head of Shuhada Org’s Nili office. 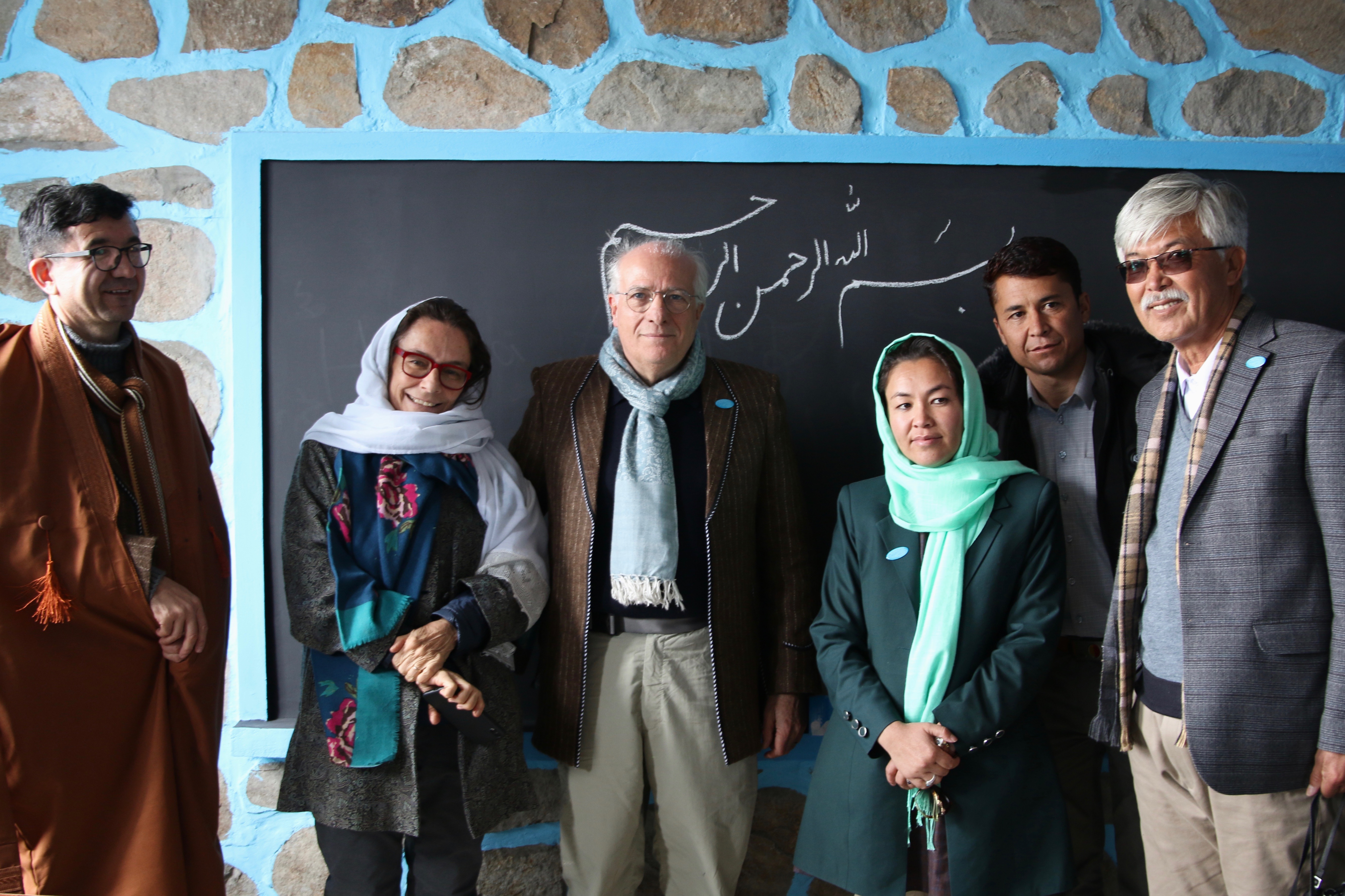 Moustafa, Maria, Marco, Ms Goljan Samar, and, last on the right Eng Gholam Hussein Matin pose in front of a blackboard with a well wishing inaugural note written on it

We promise that this will be a beginning of a more systematic commitment in Daikundi province where there is much need of investment in education. 2020 will be an important year for us as it will mark 15 years since the foundation of Arghosha Faraway Schools’ Committee.